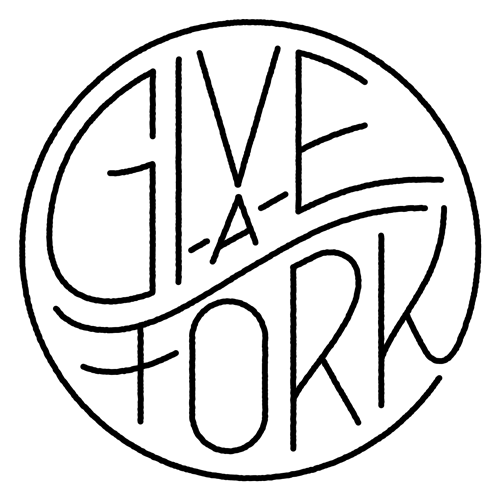 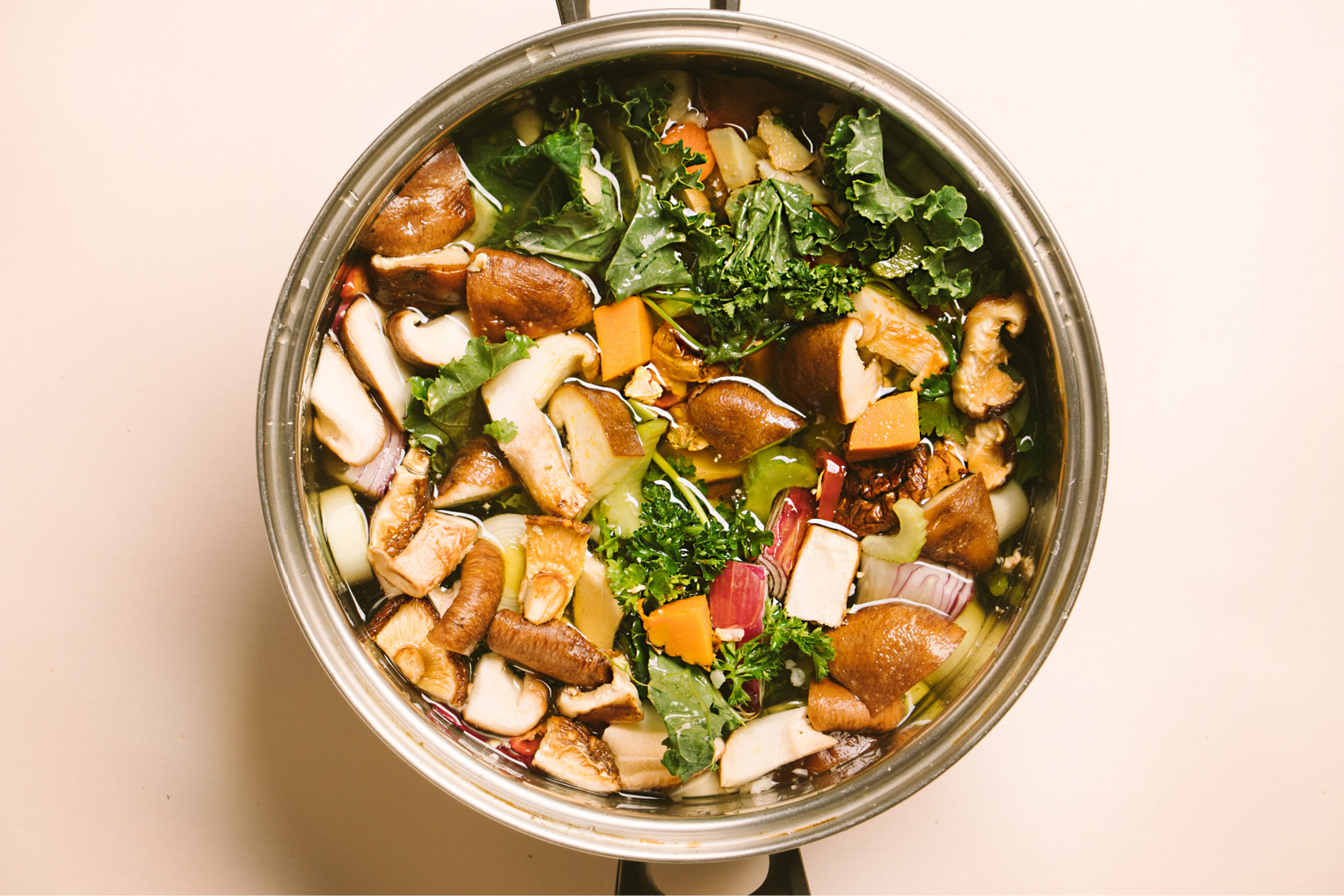 For years now there’s been a lot of talk about bone broth. Bone broth is apparently great for gut healing for a number of reasons. It’s said to be a great place to find all of the valuable amino acids, collagen, gelatin and trace minerals… but what if you don’t eat meat?

This question has plagued me whenever visiting a health practitioner about healing my gut. It seems so much more difficult to do so on a vegan diet, but in reality that isn’t completely true.

It’s easy to find the same beneficial nutrients and electrolytes in vegan-friendly sources that you would find in bone broth, I mean, look at the number of things you can pop into the broth. But the only thing it seems difficult for us to find a substitute for is collagen. The idea of this though is also a little inflated. As said in this article from TIME magazine, “Just as the dietary fat you swallow doesn’t directly translate to body fat, swallowing collagen doesn’t become collagen in or between your bones.” And in this article by NPR, they say “Eating a diet rich in leafy green vegetables is ideal. Plants offer richer sources in collagen building blocks and, in addition, provide nutrients not found in sufficient quantities in meats or broth.”

So reason one debunked?

The next is that gelatine heals the gut lining, which if you’ve researched leaky gut or digestive issues, would probably have been discussed. There are plenty of plant-based foods which can help heal the stomach lining. These include seaweed, aloe vera, healthy fats and turmeric. These all have their own unique additional nutrients to add to the broth and are by no means a one trick pony.

Either way, consuming a broth means that the work of digestion has already happened. This allows your digestive system to focus more on absorbing nutrients and spend less energy breaking down the food itself. Plus, broth is just warm and comforting and I think that that in itself has healing properties. Veggie broth for the soul. 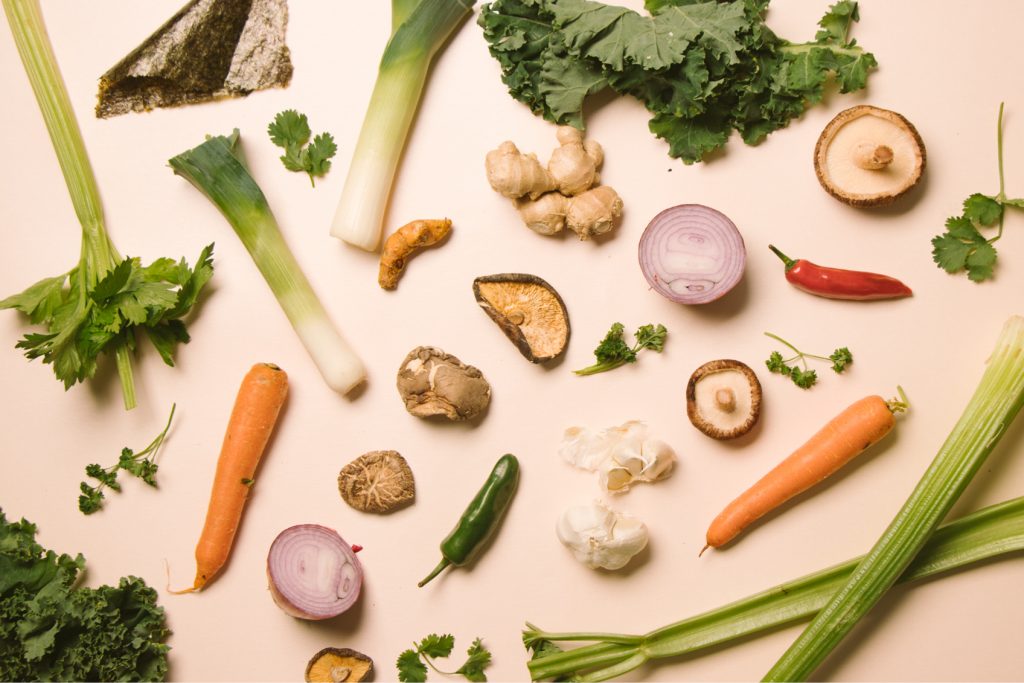 1. Gather all of your ingredients.

The best thing about a stock is that you can make it from literal scraps. I keep a ziplock bag in the freezer with peels of ginger, or carrot, or anything else I might usually discard while cooking another meal. Sure, you don’t want to eat the woody ginger skin, but it’ll add so much flavour to your broth that it’s worth hanging on to. Gather these scraps or your fresh ingredients and ensure that you have a balance of the flavours you’re hoping for in your broth. 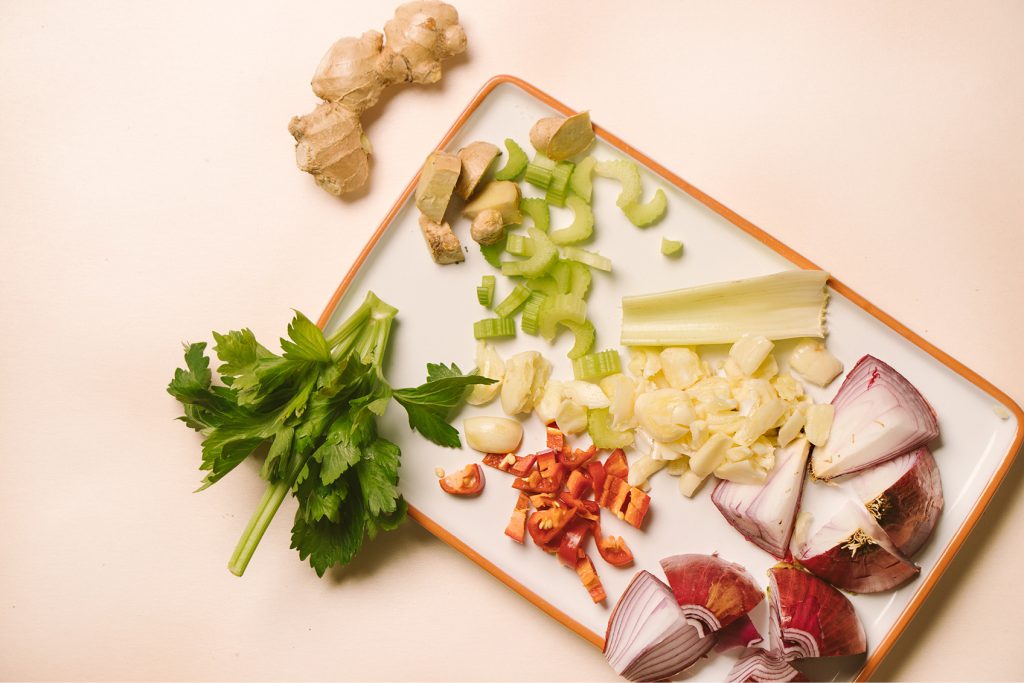 Roughly chop all of your ingredients. Remember, they’re forming the base of the broth so the smaller they are cut, th more likely they are to disappear into the liquid and natural impart more flavour, but reduce clarity. You want to be able to strain your broth and hold all of the cooked ingredients back at the end. Chop things chunky, slice garlic bulbs through the wide centre, don’t be precious here. 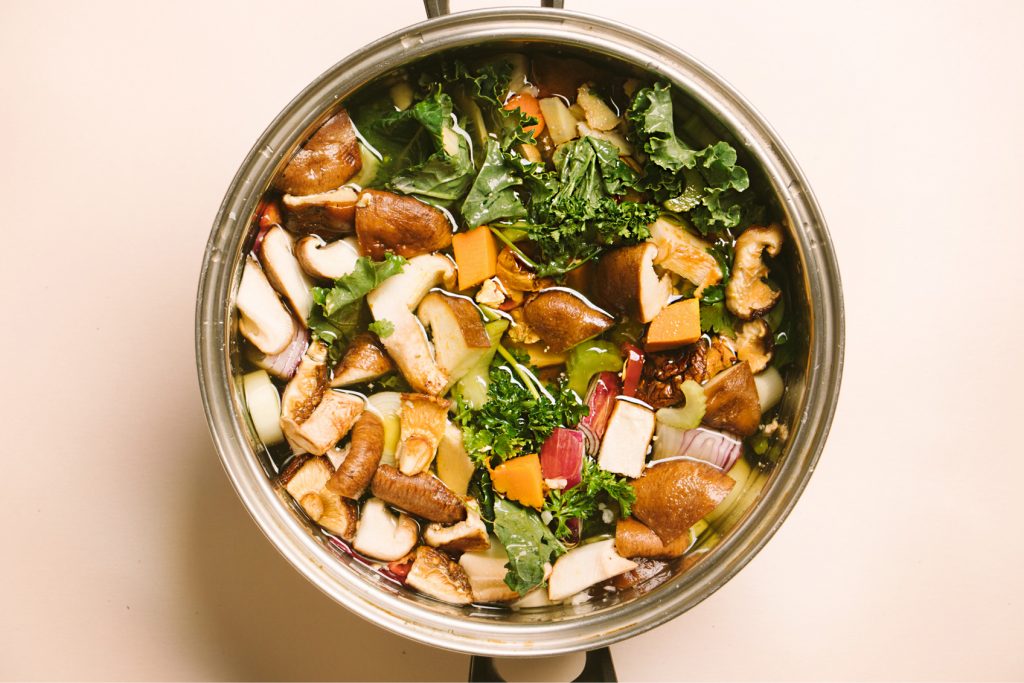 Add all of your ingredients to your big pot with lots of purified water and a little salt. To create a more umami flavour add things like shiitake mushrooms, or more herbaceous flavours can be ramped up by adding exactly the herb you’re hoping to taste. Its tough to go wrong and the goal here is to include as many nutrient dense foods as possible, and zero which may agitate your digestion. 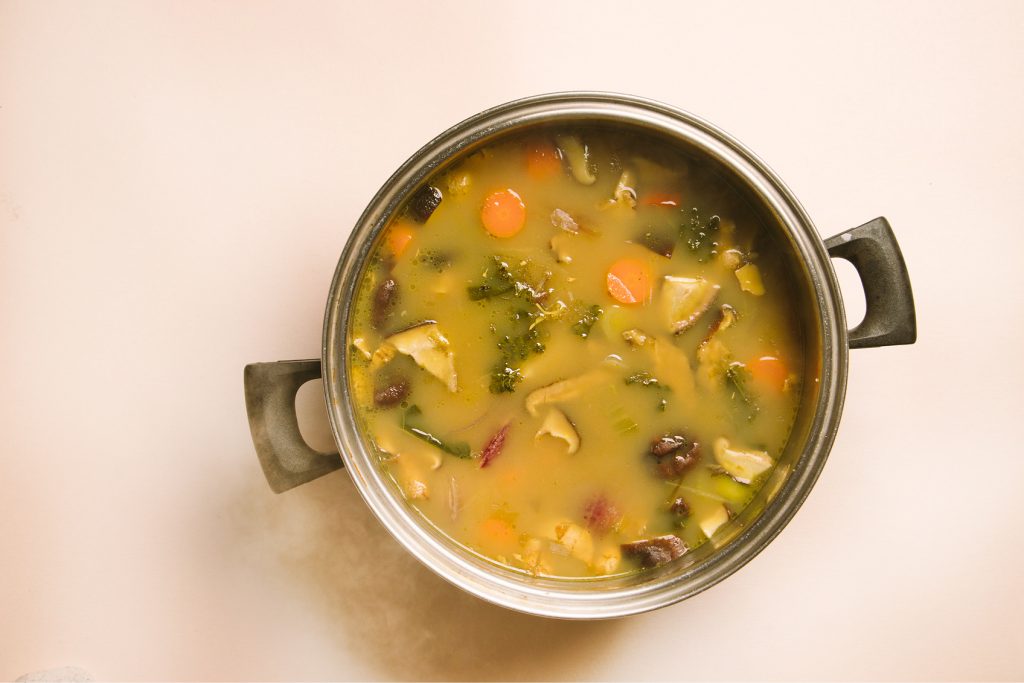 4. Read a book or catch up on your favourite series.

Really, now it’s just a waiting game. Bring your water to boil and once boiling reduce it to a simmer and cook with the lid on for about an hour. You can come back now and then to taste, add a little salt, add a little more water if you think it’s too low, etc. Try not to add too much water while it’s cooking as this will dilute the flavours. 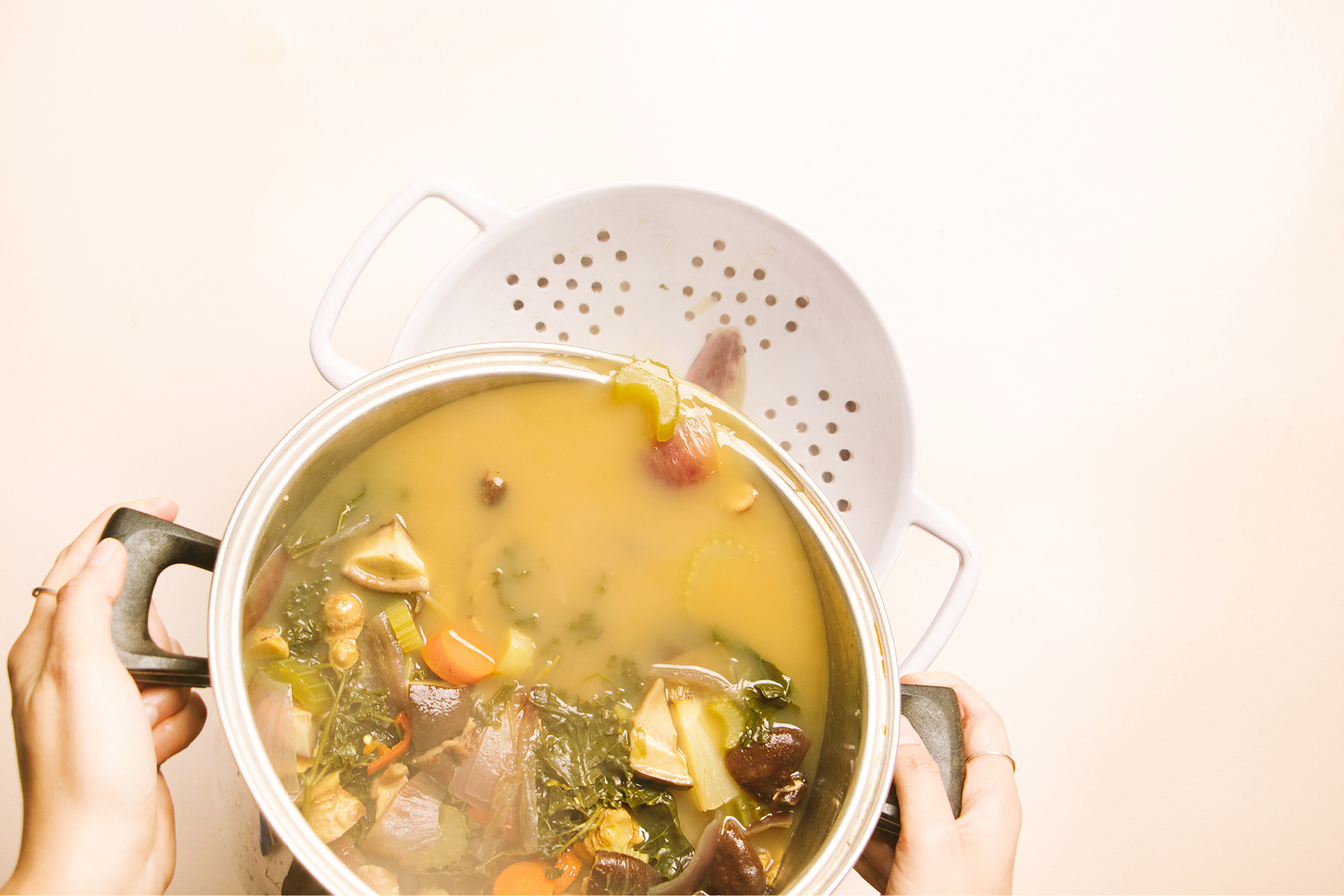 Once you’re happy with the final flavour of your broth, strain it through a sieve or colander and into another big pot or container. Make sure that the new container is large enough for the colander to sit in and not mess your precious broth all over your kitchen. Store in the fridge or freeze for later. I always keep a little of it in my freezer for nights when my IBS is giving me trouble or I simply just don’t feel like cooking.

The vegetable broth will keep for up to a week but freezes well. Enjoy the broth as a snack or add extra vegetables for a more substantial meal. 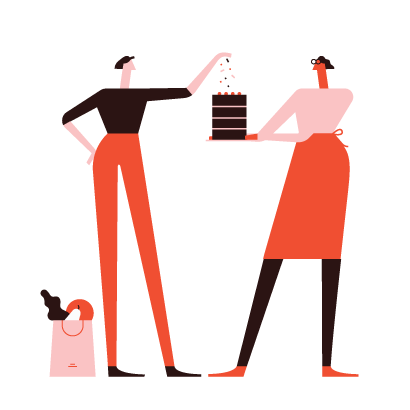